The experience of the depression and the Roosevelt recovery induced John Maynard Keynes to launch a heavy attack on the Austrian school. In his General Theory, written in 1935, he made a strong case for government intervention. Fiscal policy should come to the rescue when the public feared deflation and hoarded money. Many students of economics today believe that it was the application of Keynes’ theory that ended the downturn of 1930-33. We do not agree. In our reading of events it was the policy-induced turn of the credit cycle that did the trick. Hence, the recovery of 1934 was more «Austrian» than «Keynesian». Let us be clear: The liquidationists were wrong to allow the depression to happen as they failed to recognize that fear can beget fear. Roosevelt recognized this when in his inaugural speech he said «the only thing we have to fear is fear itself,» and he was right to intervene and stabilize the banks. But what he did – opening the credit markets – is what follows from an Austrian reading of the business cycle. 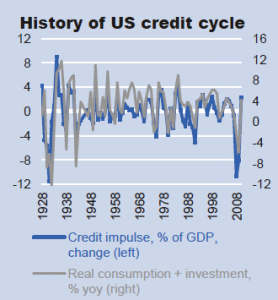 The Austrians have warned that a policy-induced extension of the credit cycle before all excesses have been eliminated in the economy will only delay the day of reckoning. But also they would have had to conclude that after the depression of 1930-33 one could hardly still see «excesses» in the economies of the western world. Nevertheless, the economy tanked again in 1937 when the monetary and later fiscal policy support was withdrawn. Most economic historians argue that the period of economic instability in the US only ended towards the end of the 1930s when the country prepared for war. The British historian Niall Ferguson has even argued, that Germany got out of the depression ahead of the US because of its earlier and more aggressive preparations for war. It seems that only in the anticipation of war the «fear of fear itself» ceased to be a de-stabilising factor in economic developments.

The historical review of the Great Depression leaves us with a disturbing conclusion: The Austrian credit cycle theory seems to have a better fit to events than Keynes’ theory of the liquidity trap and power of fiscal policy (see chart). What the Austrians seem to have missed is that an economy paralyzed by extreme risk aversion may need a jolt by confidence-building economic policy measures. But this was not what most economists and policy makers concluded.

Lessons from the Great depression: «Over to governments…»

At the end of WWII a number of western intellectuals and economists flirted with Soviet-style central planning. After all, the Soviet Union had prospered during the 1930s while the capitalist countries had been in crisis. Did this not prove that their economic model was superior?

Having lost the intellectual battle with Keynes and followers in the 1930s, the Austrians made a last stand against central economic planning with Hayek’s powerful book «The Road to Serfdom» published in 1946. They won the war of principles and the western world did not subscribe to Soviet-style central planning, despite the allure this model was exercising on many intellectuals after WWII. Even Keynes sided with the Austrians as far as the high ground was concerned and wrote to Hayek: «In my opinion it is a grand book … Morally and philosophically I find myself in agreement with virtually the whole of it: and not only in agreement with it, but in deeply moved agreement.»

Nevertheless, the Austrians lost the battle over economic policy in the post-WWII western countries. Keynes’ idea of «demand management» through fiscal policy became the mantra there after the war. Somewhat belatedly, in 1971 when he ended the link of the US Dollar to Gold, even Richard Nixon is reported to have said «I’m now a Keynesian in economics.»

From the 1950s to the end of the 1970s western economic policy makers used and abused fiscal policy as an economic management tool. Governments were quite happy to raise borrowing in economic downturns, but generally reluctant to bring it down in upturns. Towards the end of the 1960s, the use and abuse of fiscal policy created strains on government finances that could only be eased by the monetization of government debt. As a consequence, Richard Nixon on August 15, 1971 suspended the link of the USD to gold, and in effect launched the post-WWII system of fiat money.

During the post WWII period of the implicit gold standard under the Bretton-Woods System (where the USD was supposedly as good as gold), there was hardly any room for pro-active monetary policy (which, however, did not prevent the US government to use the money printing press as an auxiliary funding tool). This changed drastically after Nixon’s decision of 1971. The result was a bout of inflation as government debt and deficits were financed in part by the money printing press. As both growth and inflation disappointed, the word ?stagflation? was coined to describe the economic conditions of the 1970s.

… «over to the central banks»

The failure of the young new fiat money regime was that it lacked a monetary anchor. As a result, monetary policy ended up accommodating fiscal policy and wage policy developments. This was eventually recognized by policy makers in the early 1980s. In the seventies, Milton Friedman had proposed limits on the expansion of money supply and laid the ground for the introduction of independent central banks. As Stagflation killed the idea that there was a trade-off between inflation and unemployment, the time of monetarism had arrived. Federal Reserve Chairman Volcker used the monetarist demand to «gain control over the money supply» as a justification to engineer a deep recession that brought inflation down. Hence, the early 1980s were a period of repentance for the sins of Keynesianism committed in the late 1960s and 1970s. With the development of the theory of rational expectations and efficient financial markets, the pendulum seemed to swing back from the constructivism of economic policy before to a more market liberal regime.