This article is based on a speech given by the author on 12 September 2011 in Munich.

The financial crisis has led many people to doubt the merits of free markets and a liberal economic regime. They blame markets for the financial and economic crisis and demand tighter regulation and, in effect, more central planning by governments as a remedy. We shall argue that both the analysis on which this view is based and the policy recommendations are flawed. This crisis has been caused by too much reliance on the effectiveness of economic and financial planning. Failure of the «liquidationists» to overcome the Great Depression of the early 1930s prepared the ground for an era of interventionist economic policies. Modern macroeconomics and finance nourished the belief that we can successfully plan for the future. But the present crisis teaches us that we live in a world of Knightian uncertainty, where the «unknown unknowns» dominate and our plans for the future are regularly thwarted by unforeseen and unforeseeable events. We have suffered from «control illusion.» We need to recognize the limits of planning for the future and the superiority of a market-liberal economic order, where states, firms and individuals can be held liable for the financial decisions they have taken.

The predecessor of today’s crisis

To develop our point we first take a look at the historical predecessor of today’s financial crisis, the depression of the 1930s. During the 1920s easy monetary conditions and an exaggerated appetite for risk, evidenced by extreme leverage in the popular equity trusts, fuelled the build-up of a stock price bubble. When monetary conditions were tightened eventually, the edifice of leverage came down and the stock market crashed in October 1929.

At the time, the authorities took the crash in their stride. Many policy makers felt that the crash and a possible recession afterwards were needed to eliminate the excesses and imbalances that had built up during the roaring twenties. Andrew Mellon, then US Secretary of the Treasury, brought this view to the point when he said:

«…liquidate labor, liquidate stocks, liquidate farmers, liquidate real estate… it will purge the rottenness out of the system. High costs of living and high living will come down. People will work harder, live a more moral life. Values will be adjusted, and enterprising people will pick up from less competent people.» (Hoover, Herbert (1952). Memoirs. Hollis and Carter. p. 30). Inspired by Mellon’s attitude, those sharing the idea that a recession was a «cleansing event» were later dubbed «liquidationists.»

The «liquidationists» could claim theoretical support for their view from the Austrian school of economics around Joseph Schumpeter and Friedrich von Hayek, which built its view of the business cycle on the work of the Swedish economist Knut Wicksell. Wicksell distinguished between a natural rate of interest, which reflects the return on investment, and a market rate, which reflects the borrowing costs of funds charged by the banks. When the market rate is below the natural rate, companies borrow to invest and the economy expands. In the opposite case, investment is reduced and the economy contracts. 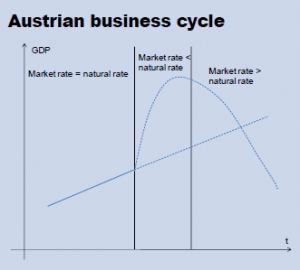 The Austrian school used this idea to develop a theory of the business cycle that puts the credit cycle in the centre (see picture left). Low interest rates stimulate borrowing from the banking system. The expansion of credit induces an expansion of the supply of money through the banking system. This in turn leads to an unsustainable credit-fuelled investment boom during which the «artificially stimulated» borrowing seeks out diminishing investment opportunities. The boom results in widespread overinvestment, causing capital resources to be misallocated into areas which would not attract investment if the credit supply remained stable. The expansion turns into bust when credit creation cannot be sustained – perhaps because of an increase in the market rate or a fall in the natural rate – and a «credit crunch» sets in. Money supply suddenly and sharply contracts when markets finally «clear,» causing resources to be reallocated back toward more efficient uses.1 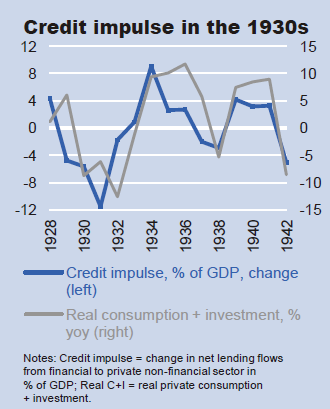 The liquidationist approach to economic policy in the aftermath of the 1929 stock market crash – for which Mellon became the symbol – accepted the downturn in the early 1930s as inevitable. What they missed was that extreme risk aversion can keep the market rate above the natural rate even after ?the rottenness? has been «purged out of the system.» Franklin D. Roosevelt, who beat Hoover in the 1932 presidential elections, seems to have intuitively understood this problem. Perhaps the most important action Roosevelt took shortly after his inauguration in early 1933 was to guarantee bank deposits. As a result, cash that people had hoarded under their mattresses came back to the banks and improved their liquidity situation. When the Roosevelt administration later in the year recapitalized banks, credit extension picked up again and the economy recovered. It is interesting that there was no big fiscal policy stimulus in 1933 – the famous New Deal was felt only later. Hence, contrary to conventional wisdom, the spark that ignited the recovery of 1934 was the turn in the credit cycle (see chart).